Christmas is a time to cherish peace and goodwill, to be plenteous in mercy.
As bells tolled, a sea of devotees thronged St Joseph the Worker Church, Neermarga, decked up with lights, solid and Christmas Crib with a manger to solemnize the feast of the incarnation, the feast of God becoming flesh (the Latin ‘in carne’ means ‘enfleshment’) with pep and euphoria on December 24, 2022.

Celebrating advent is spiritual preparation marked by an eager longing for the birth of Jesus Christ- Prayer, Acts of Penance, an advent wreath featuring 4 candles, lighting one candle of the advent wreaths each Sunday with themes of Hope, Love, Joy and Peace. The capsulized anecdotal presentations and Meaningful Reflections by Fr Anil D’Mello, Parish Priest depicting each theme found a unique niche as a sterling collection of Self Development pearls.

On December 24 when the clock struck 6.30 pm parish choir tunefully sang songs of praise and joy (Christmas Carols), permeating the significance of creed, good cheer and sense of togetherness. The Christmas Holy Mass was presided over by Monsignor, Alfred Rayan DSouza serving as second secretary at the Apostolic Nunciature at Zagreb in the Republic of Croatia and concelebrated by Rev Fr Anil D Mello, Parish Priest and Rev Fr. Henry Vas.  Rev Fr Anil extended a warm and sociable welcome to the Guest Priests and parishioners assembled in large numbers to celebrate the great mystery of Redemption and introduced Monsignor, Alfred Rayan D Souza and Rev Fr Henry to the congregation. In his homily, Monsignor, Alfred Rayan D Souza said, “We have breaking news this joyous evening -good news of great joy heralding the Birth of the Saviour that the Angel brought to the Shepherds. Like the Shepherds, we too are called by God to be His messengers of Christ’s Good News”. Further he exhorted the laity to reflect and meditate on the love of God and the poor life Jesus lived in the Holy family of Nazareth. He reiterated the words of Isaiah that the people who walked in darkness have seen a great light and the reminder given by St. Paul in his letter to Titus that the grace of God has appeared bringing salvation to all. Each fact was well marinated with the right measure of select quotes and vignettes that enlightened the Faithful to live life in its fullness and beauty.

Mr. James Menezes-Editor of Neermarchi Nadar was honoured on his retirement after an illustrious 11 years of his untiring and dedicated services at the magazine with a shawl by Rev Fr.Anil D Mello, Citation read by Mr. Ravi Saldanha- Vice President Parish Pastoral Council and handing of the citation by  Sister Sujatha and Sister Mavis-Superiors of Holy Cross Convent and Carmel Ashram respectively, Flower Pot by Monsignor, Alfred Rayan DSouza and Fr. Henry Vas , bowl of fruits by Mr. Prakash Pereira-Secretary of Parish Pastoral Council, Mr. Ravi Saldanha , Mr. Wilfred Lobo and Mr. Melwyn Vas-Newly Appointed Editors of the Magazine .

After the Eucharistic Celebration, the vibrant ICYM took each one of the audiences to a cultural extravaganza that included a medley of music, dances, comedy skit, housie game, Christmas combo that spread the light of elation in the hearts of viewers.

The programme was compered by Ashton, Derick  and Ancita. Jelroy Vas President of ICYM welcomed the gathering 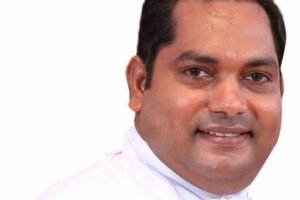